Maximum safe speed on the CBBT is 45 mph.
×
×
Every Engineering Marvel Deserves a Good Story.

For 58 years, the Chesapeake Bay Bridge-Tunnel has captured worldwide attention. Let’s take a look back to see how it came to be. 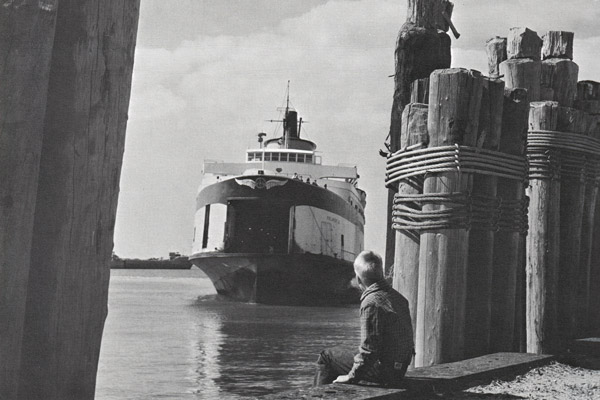 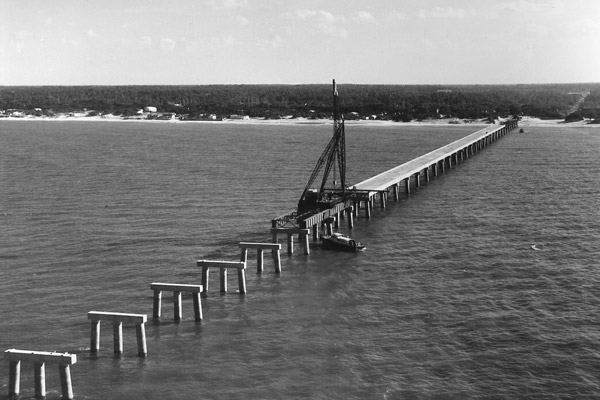 The General Assembly authorized the Ferry Commission to explore the construction of a fixed crossing. 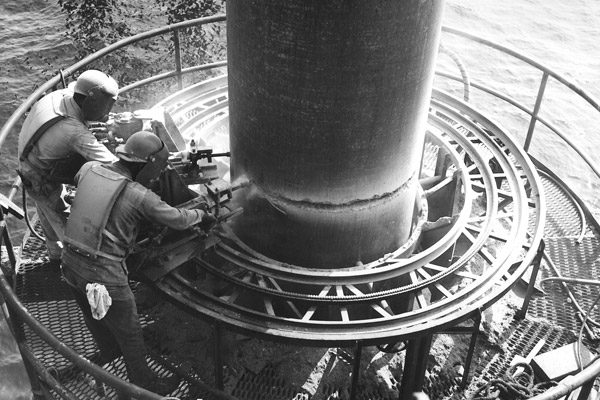 The Chesapeake Bay Ferry Commission sold $200 million in revenue bonds to private investors. No local, state or federal tax money was used in the construction of the project. 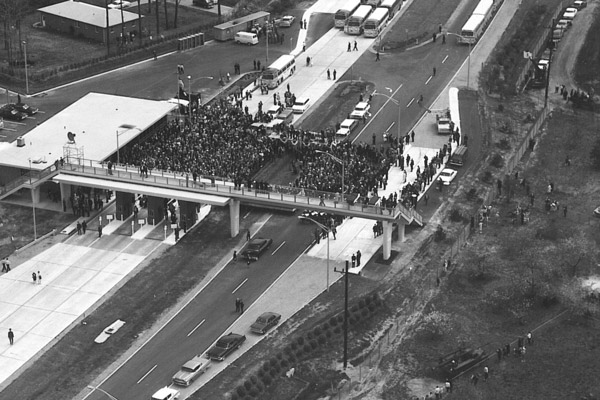 Just 42 months after construction began – the Bridge-Tunnel opened to traffic and ferry service was discontinued. 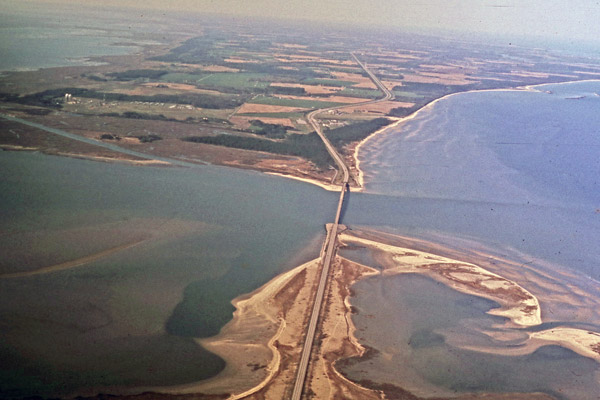 The Bridge-Tunnel was officially named the Lucius J. Kellam, Jr. Bridge-Tunnel in honor of the man who spearheaded the project as it moved from a vision to a reality. 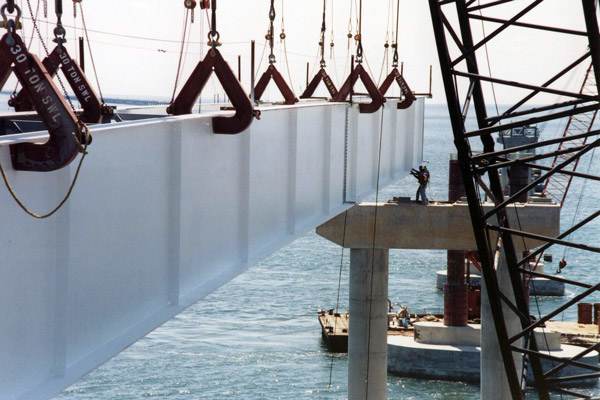 The Bridge-Tunnel opened Phase I of the Parallel Crossing, which expanded the two-lane facility into four lanes.

The Commission approved a resolution for the acceleration of the construction of a parallel tunnel at Thimble Shoal Channel. 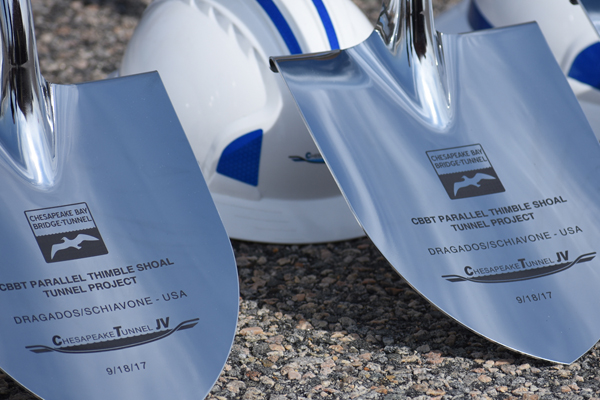 The Commission awarded Phase II of the Parallel Crossing Project to Chesapeake Tunnel Joint Venture in the amount of $756,987,318. 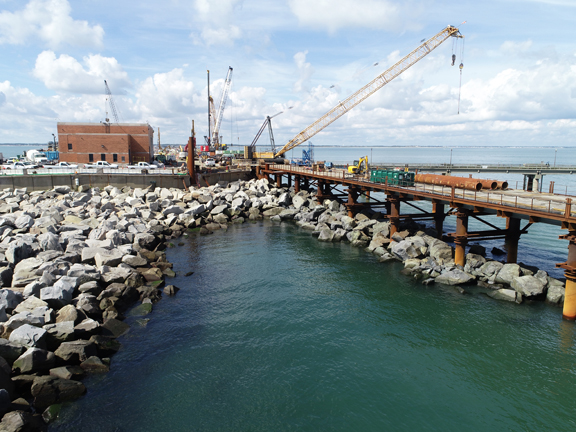 Construction began on the parallel tunnel at Thimble Shoal Channel.

For two and half centuries, the waters of the Chesapeake Bay served as a barrier to continuous travel from Virginia’s Eastern Shore to it’s mainland.

As early as 1705, packet ships and then in 1880, bay steamers ploughed back and forth between the lower tip of Virginia’s Eastern Shore and the Hampton Roads-Norfolk area.  In 1933, the Virginia Ferry Corporation began regular vehicular ferry service with just a single vessel making six one-way crossings daily.

The Virginia General Assembly created the Chesapeake Bay Ferry District and the Chesapeake Bay Ferry Commission as the governing body of the District in 1954, primarily for the purpose of re-establishing Cape Charles-Old Point Comfort ferry service.   Through bond financing, the Commission acquired the  private ferry corporation in May 1956 to improve ferry service between Virginia’s Eastern Shore and the Norfolk/Virginia Beach area and to implement ferry service between the Eastern Shore and the Hampton/Newport News area.

The seven-ship fleet made 90 one-way crossings each day, carrying millions of passengers on the 85-minute cruise across the Chesapeake Bay.

With growth in the Tidewater area and increased travel and commerce along the East Coast, the ferry system could not keep up with the ever-increasing volume of traffic.  The only permanent solution was to replace the ferry system with one of the boldest projects ever undertaken:  a Bridge-Tunnel across the Bay!

The Commission employed Consulting Engineers, Traffic Engineers and Financial Advisors to assist with determining the feasibility.

The Chesapeake Bay Bridge and Tunnel Commission pledged to pay the principal and interest on the $200 million in revenue bonds with monies collected by future tolls.

Following its opening on April 15, 1964, the Chesapeake Bay Bridge-Tunnel was selected “One of the Seven Engineering Wonders of the Modern World,” in a worldwide competition that included more than 100 major projects.

From shore to shore, the Bridge-Tunnel measures 17.6 miles and is considered one of the world’s largest bridge-tunnel complexes.  Construction of the span required undertaking a project of more than 12 miles of low-level trestles, two one-mile tunnels, two bridges, almost 2 miles of causeway, four manmade islands and 5.5 miles of approach roads, totaling 23 miles.

The individual components are not the largest or the longest ever built, but the facility is unique in the number of different types of major structures it includes.

In 1965, the Chesapeake Bay Bridge-Tunnel was distinguished as “The Outstanding Civil Engineering Achievement” by the American Society of Civil Engineers.

Looking toward the future, the Chesapeake Bay Bridge-Tunnel Commission began investigating the possibility of building a parallel crossing.  In-house studies and projections began, and a comprehensive study was conducted in cooperation with the Virginia Department of Transportation.  By 1989, it was concluded that parallel bridges, trestles, and roadways would be needed by the year 2000 to meet future traffic demands and provide a safer crossing for travelers.

In 1990, the Virginia General Assembly empowered the Chesapeake Bay Bridge-Tunnel Commission with the authority to proceed with the parallel crossing project.

In 1995, revenue bonds were sold to finance the construction of the Parallel Crossing Project and on May 4, the project was awarded to a joint venture of PCL Civil Constructors, Inc., the Hardaway Company, and Interbeton, Inc. in the amount of $197,185,777.  The contract included the expansion of toll plazas, trestles, bridges and roadways, as well as maintenance and repair on the original span.  Tunnels were not included due to financial constraints.

With the completion of Phase I, the project transformed from a two-lane facility to four lanes, with the exception of the tunnels.

Once again, no local, state or federal tax monies was utilized for the construction costs.

Thimble Shoal Channel was selected to be the first parallel tunnel because it is the more expansive and conservative of the two tunnel designs. It will be marginally longer and deeper.  The CBBT District works closely with the Virginia Port Authority to monitor the future shipping requirements to service the Ports of Hampton Roads.

The Design-Build contracting model was used to maximize cost savings and to shorten the final delivery timeline.

Partners for this project include:

A groundbreaking ceremony was held in October 2017.

Project financing will be comprised of:

Construction is well underway as CTJV prepares for the arrival of Chessie.   Tunnel boring should begin in winter 2023.

Want to Learn More About Our History? Check Out These Original Videos from Our Archives.

An Engineering Marvel in the Making

Construction of the Parallel Crossing

We employ dedicated people who meet the challenge of customer service.